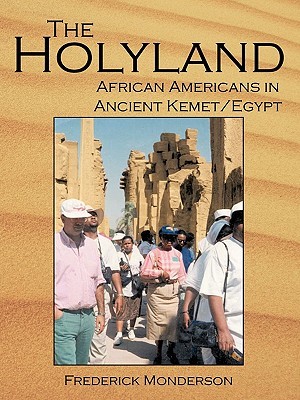 The Holy Land is a “Novel of sorts” about some 48 African Americans traveling through Egypt on a Educational Tour led by Dr. Fred Monderson, an Egyptologist, who uses some of his previous writings to engage his people with reading material as they go from site to site. The book is packed with a whole repertoire of experiences of the Tour Guide, from his class notes as a student at Hunter College of the City University of New York in the early 1970s, notes from interesting lectures he has attended in New York, notes from  his classes at Temple’s Afrocentric Institute under Dr. Molefi Asante, notes from lectures at New York University and the Metropolitan Museum of Arts in New York and historical and cultural sayings as well as lectures given on the spot after each day’s itinerary.

The book is divided into sections involving discussions in the Airport Lounge at JFK, New York prior to departure and once on the ground in Egypt and checked into hotels by all the characters then the book is divided into the following arrangement. The characters talk to each other at breakfast, on the bus to the sites, at the lecture after each day’s outing, followed by a question and answer period, middle of the day free time, then at dinner, in the hotel lounge and back in their hotel rooms. Each individual brings a different perspective to the group dynamic sharing their knowledge and experiences to make the overall educational tour a memorable one. Some are students who share their notes, others are retired professionals who write and offer aspects of their knowledge from work to play. Then famous quotations are added to make the overall picture one of a spiritual, historical, cultural, photographic and historical adventure.  More than a hundred photos are added to make the stops on the tour seem real when a little imagination is added.