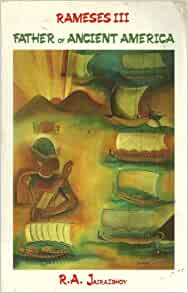 R.A. Jairazbhoy RAMESES Ill FATHER OF ANCIENT AMERICA KARNAK EGYPTOLOGY HISTORY/AMERICAN STUDIES In a bold attempt to rescue and restore American history to its rightful place, R.A. Jairazbhoy, the world’s leading authority on cross-cultural Egypto-American civilizations, reconstructs the realization of Rameses Ill’s wish to find an earthly paradise. This adventure led him to the Americas. In this detailed comparative text, the author demonstrates through the use of 134 illustrations and religious, artistic, mythological and other cultural correspondances, the precedence of ancient Egyptian influence on the formative development of Mexico and on the United States. The evidence is convincing, the ideas cogently presented and argued which leave no stone unturned. R.A. Jairazbhoy is the foremost scholar alive today on Mesoamerican civilizations. He is the author of. Ancient Egyptians in the Pacific, and a three volume work on Old World influences in the Americas.

Be the first to review “Rameses III: Father of Ancient America” Cancel reply