The Secret of Regeneration Book 2 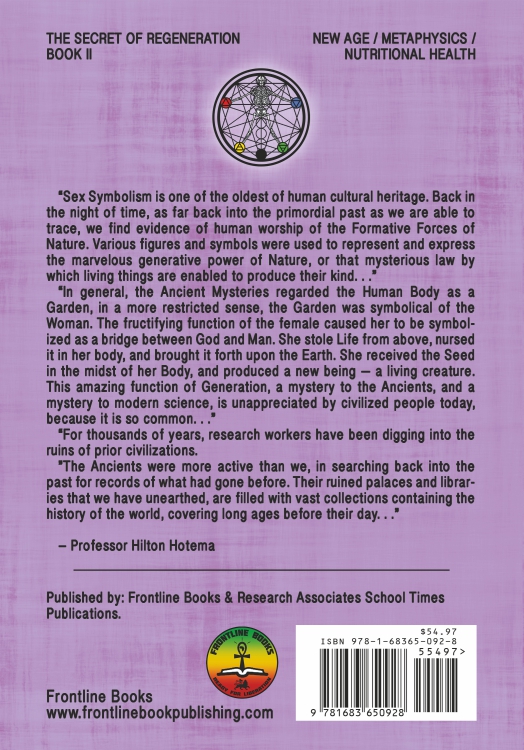 The Secret of Regeneration Book 2

Secret Regenaration: Dr. Walter Siegmeister, writing in How to Live magazine of February, 1935, says: “If modem society was not controlled by Money Kings whose henchmen govern our educational institutions, the press, the church, etc., Professor Hilton Hotema would be considered as one of the greatest scientists of our day. For in his marvelous course of Post-Graduate Orthopathy (Secret of Regeneration), he presents a discovery that is fully as great as that made by Dr. Charles Darwin, — in fact, greater, because it is truer, viz., that instead of spring from lower beings (apes), Man descended from Superhuman Beings — The Gods of the Ancients. If the scientific world possessed the intelligence to appreciate this discovery, the name of Hilton Hotema would be placed in the shining galaxy of mankind’s intellectual geniuses.”

Some of the 128 Chapters — Truth, The Dark Ages, Age of Ignorance, Age of the Earth, Age of Man, Sunken Continents, The Antediluvian World, Ancient Cultures, People of Atlantis, Despots and Tyrants, Nineveh and Assyria, The Chaldeans, The Hebrews, Israelites in Egypt, Driven out of Egypt, The Babylonian Captivity, The Scriptures of the Jews, The First Forgery, The Priest and the Scribe, The Second Forgery, The Pentateuch, The Third Forgery, Story of the Exodus, Biblical Contradictions, The Fourth Forgery, The Synoptic Gospels, Many Gospels, The Work of the Priesthood, The Need for Gospels, The Essenes, Pious Fraud, Ecclesiastical Lying and Forgery, Argument Against Christianity, Is Jesus a Myth/ Deceiving the Masses, How the Church Triumphed, etc., etc., etc.